Fans are eagerly waiting for Rick and Morty Season 5 Episode 7, after the release of the sixth episode in the season. In the previous episode, we saw Rick and Morty entering the White House, as they planned to steal the Constitution. But, Morty ends up destroying the Constitution and the Statue of Liberty to set the French Assassin free. This was an assassin sent over by the French as a Trojan Horse. Fearing the US Government closing in on them, Rick and Mort flee back to their home. Oddly enough, the French Assassin isn’t the main attraction of the episode. It’s more specifically a turkey fight that transcends into an extraordinary mission that involves the US Government’s biggest secret and two alien life forms that came on earth centuries ago. So, let’s see what happened in last week’s Rick and Morty as we head towards Season 5 Episode 7.

Rick and Morty are back in their weaponized home as the US Government encapsulates them in a weird shield. This is an occasion of Thanksgiving that was getting ruined by the ruckus outside. The President had a bone to pick with Rick and has a foolproof plan to take him down. In this episode, it is established that previously, Rick has gained pardon by turning himself into a turkey. However, that works. Both Rick and the President dictate their plans, as both are going to toe to toe with one another. Nevertheless, the President wins as he had an extra step in his plan. As Rick would infiltrate the turkeys for Thanksgiving, the President planned to send in the US soldiers as Turkeys themselves. This would allow the soldiers to distinguish the normal Turkeys from Rick.

Rick and Morty Season 5 Episode 6 titled “Rick & Morty’s Thanksploitation Spectacular” follows the Turkey Rick and Morty infiltrating the US Government’s Turkeys. The US soldiers have arrived on the scene for the mission. As Rick sees this, he and Morty disguise themselves as US soldiers. The President is vigilant of Rick, as he himself turns into a Turkey and joins the crew. Here, he quickly identifies Rick and a fight ensues. During this fight, a gut punch by Rick causes the President’s tracker to spill out into the mouth of another Turkey. As the fight was getting crazy, the US soldiers decide to extract the President from the fight. As the tracker was inside another Turkey, they took that Turkey instead. When they get outside, the Turkey is injected with the President’s DNA to look like him. 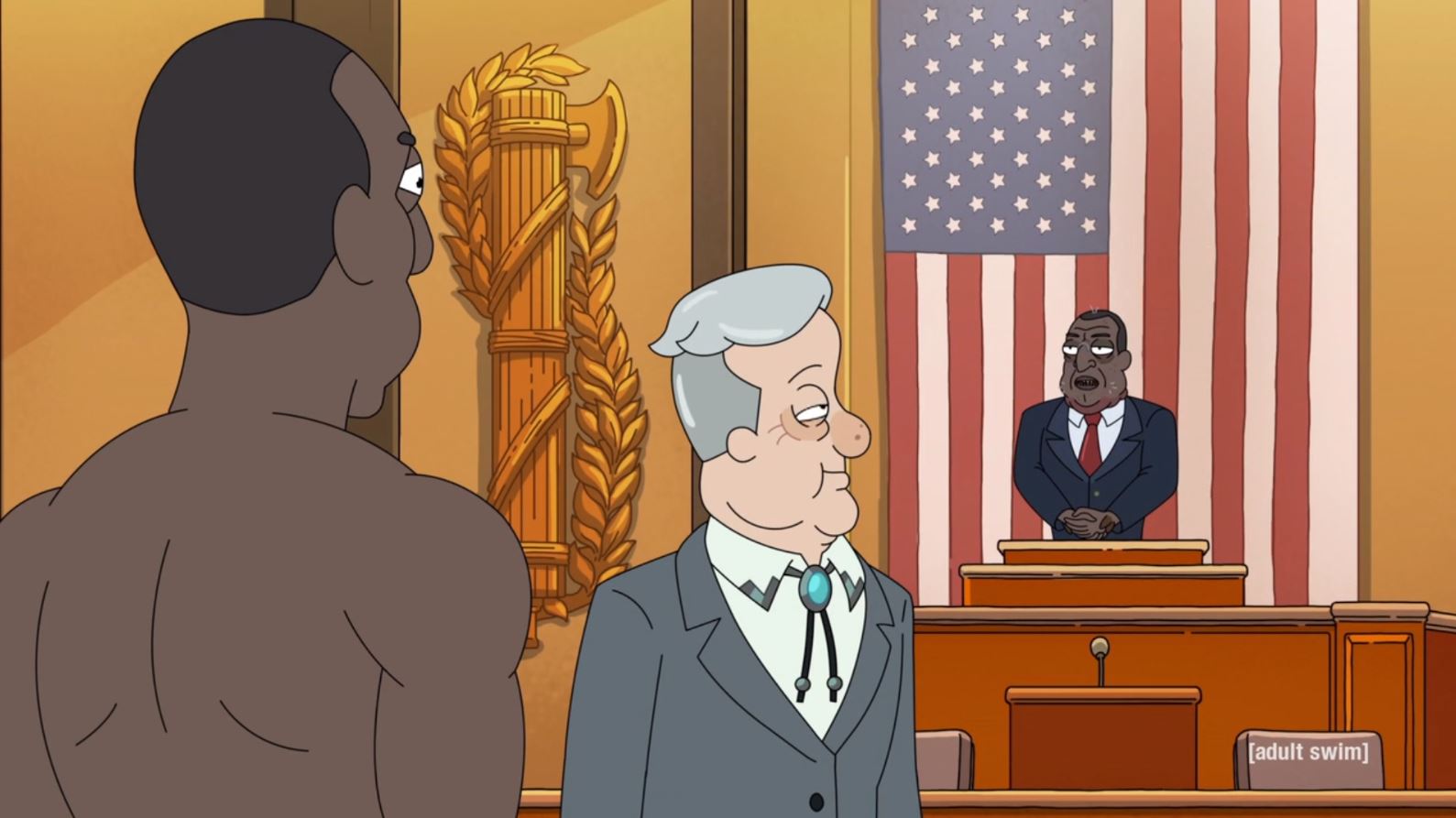 The Real and Fake President.

Subsequently, the President, Rick, and Morty along with other Turkeys are sent into a den with an anthropomorphic spider FDR. Morty manages to kill him as all three of them head to the White House to take down the fake President. Here, the fake President was already planning to sell New York to France and keep the money for the Government employees. But as the nude President, Rick, and Morty arrive, it is very well made evident that the politicians prefer the Turkey President. Later, all three of them head back to Smith’s home. Here, the President and Rick are quarreling as Morty sees that both of them are partially right and wrong. This is when Beth arrives and shouts at both of them and asks them to come and sit down for Thanksgiving dinner. During the dinner, news arrives that Turkey President was making Turkey Super Soldiers.

The President decides to re-employ the help of his US Soldiers as he calls upon their help through his speech. This was a nonchalant speech about speeches as he asks his soldiers to gather their arms and go into battle. The mission begins as a huge robot with fake Rick and Morty distract the Turkey army. During this, the soldiers, The President, Rick, and Morty infiltrate the military base. Then the trio heads over to open a cave where the US Government has hidden two alien life forms. These life forms had arrived on Earth centuries ago. While they were at war with one another, they shared the same hatred for Turkeys. They join the fight as humans gain an upper hand. 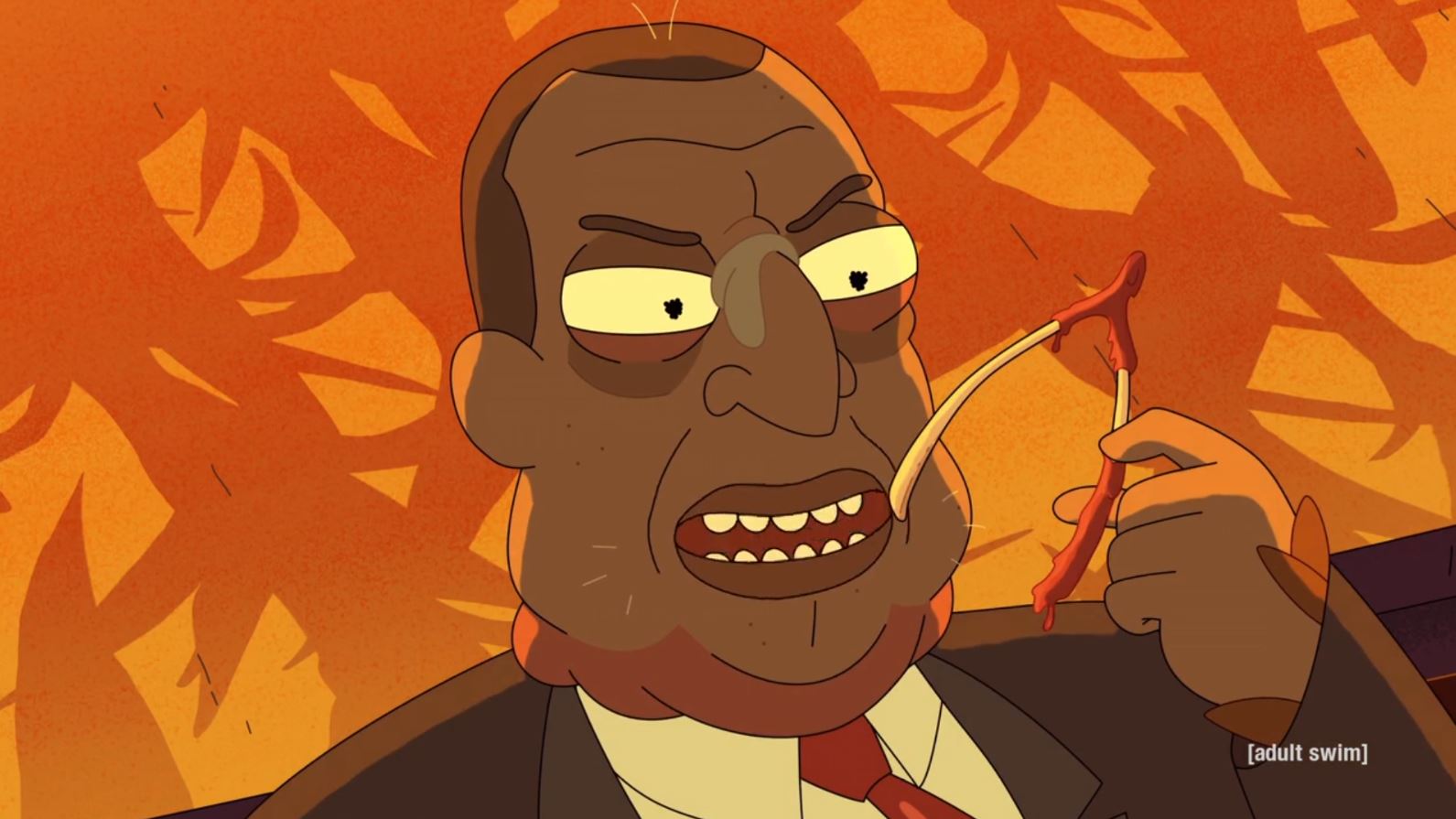 Also Read: Top 10 War Movies of All Time You Must Watch

Rick and Morty Season 5 Episode 7 is set to be released on 1st August 2021. This Episode will be titled “Gotron Jerrysis Rickvangelion.” And just like all Rick and Morty Season 5 episodes, this episode too will be aired at 11 pm ET/10 pm CT. This show has a release pattern of one episode every Sunday, with a runtime of around 30 minutes, along with the commercials. If you happen to be a fan of Rick and Morty, surely you would want to watch the episode as soon as it airs. For this, you need to convert the time mentioned above to that of your local time and tune in.

We also have the Episode Schedule for the last three episodes: 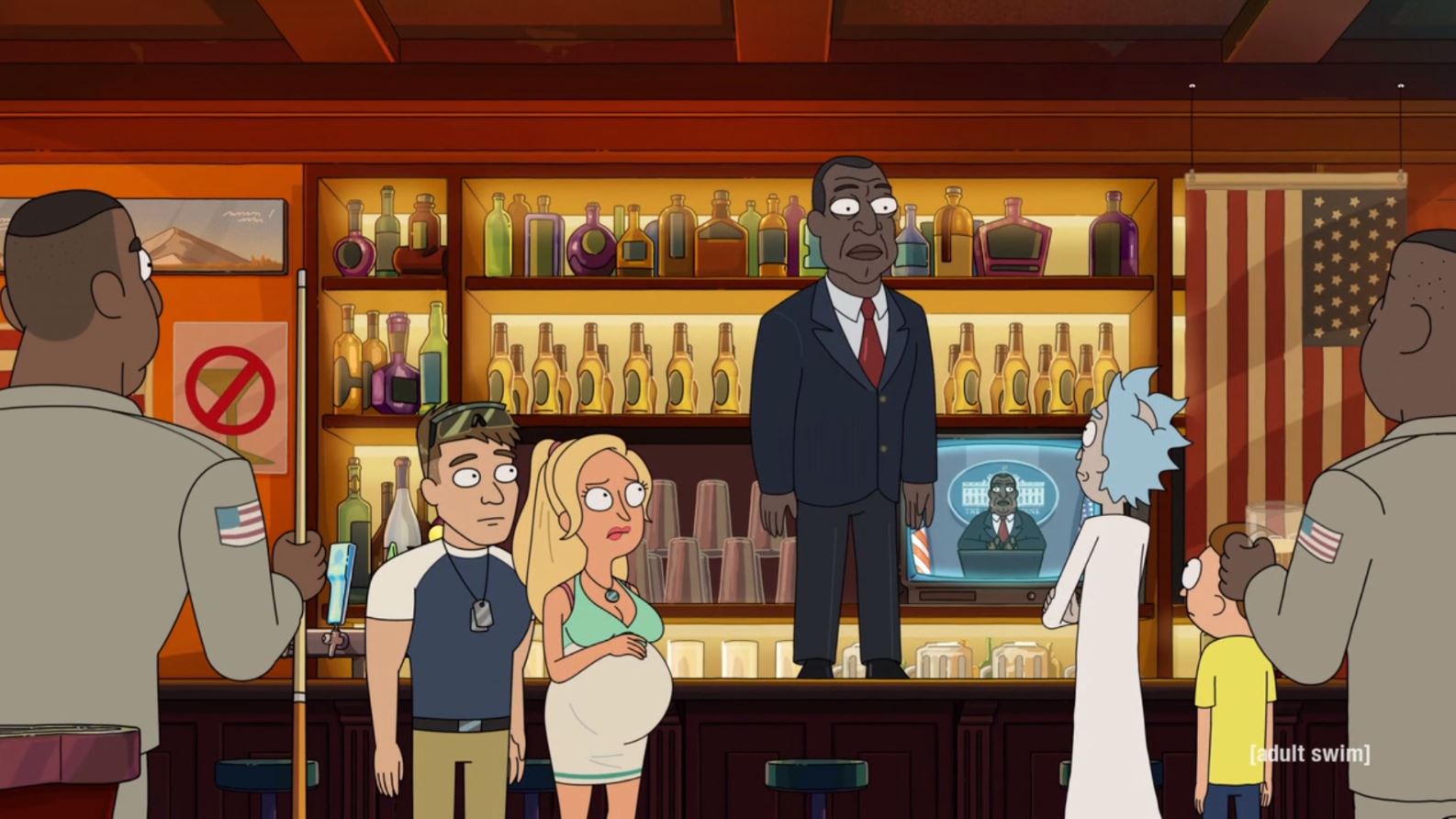 President’s speech to his soldiers.

Rick and Morty Season 5 Episode 7 titled “Gotron Jerrysis Rickvangelion,” should mean that this episode will loosely be based on the 1997 anime “Neon Genesis Evangelion.” This episode will see the Smith family controlling a Blue Giant Ferret Robot. This is evident from the promo as Rick, Morty, and Summer are seemingly on a planet. Both Rick and Morty are seen wearing caps saying Boob World. According to the pretext, Rick was there to make a Boob World for Morty, but then they found the huge robot. Rick gives Morty one of the two options. Either he could get the robot or Boob World. This question was clearly rhetorical as Rick only cared about the robot. According to Rick, this robot was the only one in five robots that were ever made. And he wants to keep it.

All of Rick and Morty’s Season 5 Episodes are loosely based on some shows or movies from back in the day. Similar events are set to occur in this episode too. In the past, we have seen Rick resembling Inspector Gadget while he alongside Morty had also tool over the role of Brown and Marty from Back to the Future. These kinds of episodes are a staple to Rick and Morty, and the episode titles of the future episodes also suggest the same. A notable one seems to be the title of the last episode, “Rickmurai Jack,” which could be related to Samurai Jack.

Where To Watch Rick and Morty?

“Rick and Morty” is set to air on Adult Swim. Adult Swim is the adult section of Cartoon Network. The shows under this banner air a bit late at night after all the kids’ shows get over. If one happens to miss the episode or is a cord-cutter, they can watch the episode on the official website of Adult Swim. Alternative streaming websites to watch “Rick and Morty” include Hulu, Channel4, HBO Max, Netflix, YouTube TV, and TVNZ OnDemand. This show can also be watched with no. For this no additional cost. This can be done through particular websites that need your cable operator details to run the shows. Such websites include Sling, Xfinity Stream, and DirecTV.

If one is not able to access any of the above streaming websites, one can always choose to buy or rent individual episodes of the show. This service is available through Microsoft Store, VUDU, Amazon Prime Video, Google Play, and iTunes. 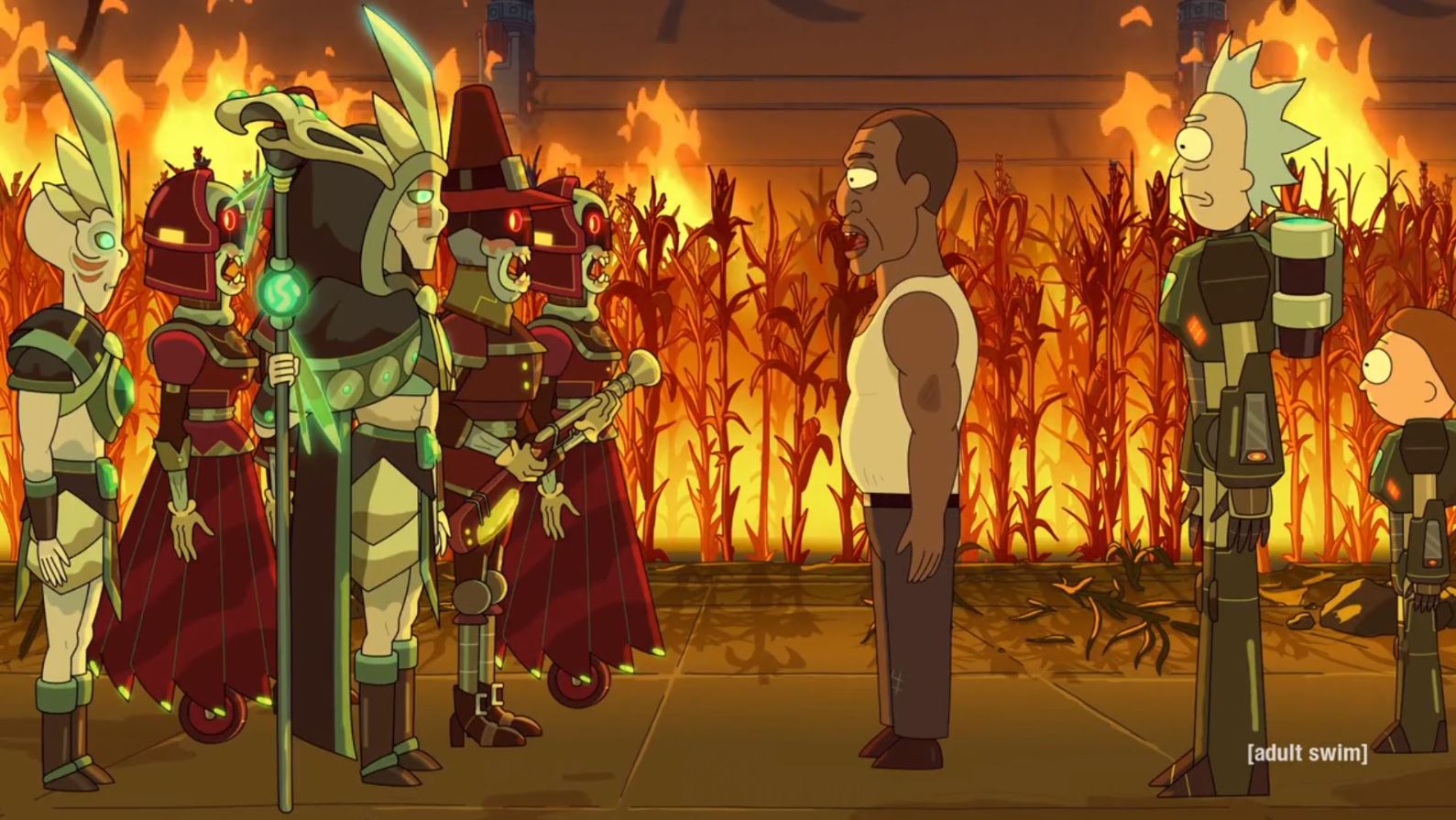 The Aliens and Humans.

Also Read: Rick and Morty Season 5 on Hulu: Everything We Know